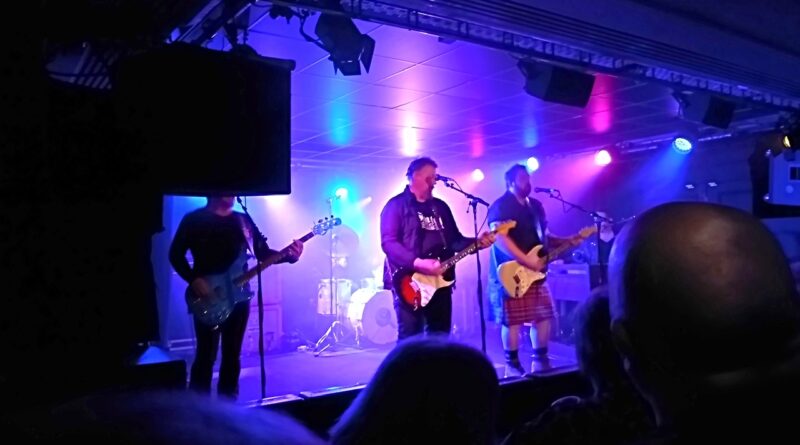 This concert was part of the Aberdeen Jazz Festival line up, so it was a surprise for the main act to walk onto the stage and declare “we are not a jazz band”.  Must admit I’d applied for a review pass as a friend had said she would like to go to the festival and jazz is not usually something I listen to, so I was delighted, but could feel her disappointment.

The support band are local and I’ve heard of them before but never managed to see them live before so I was excited to experience them at last.  Gerry himself has such an excellent voice for the vocals, whilst the band play well around him.  I was delighted to find a harmonica features heavily as they are marvellous instruments and much underused!  There was an instrumental version of Dark Island as well as Strange Kind Of Love and they finished with Slave To The Rhythm, which was an excellent tune!

Next was King King, wow does their lead singer Alan Nimmo have charisma and stage presence?!  They played several songs from their new album Maverick including Rush Hour and Long History of Love.  Alan told us they’d written the album just before lockdown so this was the first chance to play some of the songs, and then they played Whatever It Takes To Survive, which seemed remarkably fitting after the past two years in a pandemic.

A couple of times Alan said how great it was to be back to live music in Scotland – and its great these guys are back sharing their songs with us.  Spotify is great and all, but there’s nothing quite like live music, especially when they get you singing along, being part of the sound, and when they lose themselves in an instrumental.  I love guitars, and most instruments, and love an instrumental when you can just concentrate on the music and the dexterity of the player’s fingers, and the magic that it produces.
The man next to me commented to his wife in-between songs that its “self indulgent”.  He also seemed to like checking what the time was so I question his authority on the topic, she was jiggling away happily though.

Unfortunately it all had to end as Alan said they had to travel home tonight as he’d promised to take his Mammy for lunch tomorrow, well it was Mother’s Day.  They finished with Stranger To Love, which featured another mesmerising instrumental.  It went down and down to almost silence, and apart from some drunken youngsters, the room went quiet too, caught in the moment – and then it burst back into life and we all ended on a total high.

No that was not what my friend was expecting from a Jazz Festival but we had a good night out – and after the last 2 years surely that’s all anyone can ask for?!  I certainly hope King King make it back to Aberdeen…