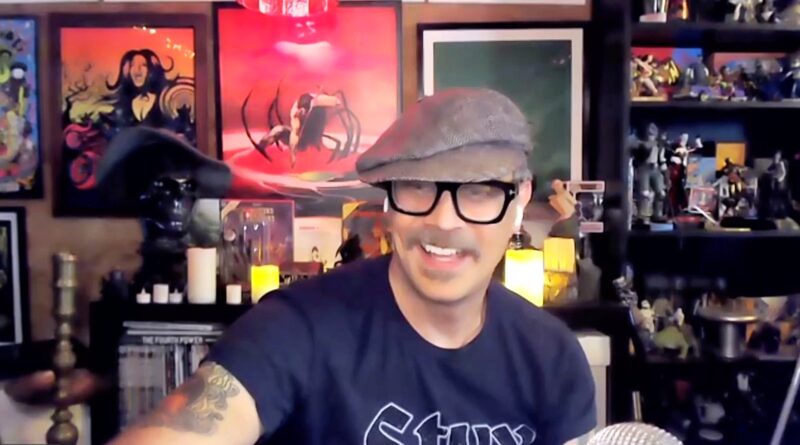 So, this is something of a difference to the normal podcast episode because the 5D Pop Culture Website was delighted to announce that this weekend we were able to talk with actor, writer, D&D enthusiast and purveyor of groovy wares & nerdy paraphernalia, Todd Stashwick. Todd is an extremely familiar face on TV, having appeared in all manner of TV & film goodies including 12 Monkeys, The Originals, The Riches, Gotham, Heroes and much, much more. But not only that, I’m happy to say that he’s also a bone fide nerd of the highest order! So before you check out his video chat with me at the bottom of this page, let me give you a little flavour of the nerdy delicacies in store….

The interview itself got up to a somewhat inauspicious start as some 5D Pop Culture website fool messed up the zoom meeting booking, which meant that Todd was kept waiting for 10 mins while the aforementioned fool sorted out the technical issue (the technical issue being that I’m an idiot). However, after falling back on my tried and tested method of frantically pressing any button and clicking on any and every icon on the screen in front of me, things were eventually sorted so that the interview could start. Todd of course was patience personified as he sat in his quite frankly stunning nerd lair – well, I’m assuming it was patience in his eyes as I explained to him the ‘slight technical issue’, either that or it was resigned pity his eyes were masking. Naturally, co-host Zack will eagerly point out that it wasn’t his fault, due to the minor fact that he was unable to take an active part in this week’s episode – annoyingly, he will be correct on this one occasion.
And so it began….

It is safe to say that it was a hugely enjoyable talk from my standpoint as we discussed Todd’s acting background and influences as well as exploring his love of improv, which resulted in a surprising revelation of some particular Scottish & Liverpudlian connections! Of course, there also had to be some discussion on Todd’s extensive TV career, including his role in the excellent 12 Monkeys series – and in the process he majestically passed the La Jetee test with flying colours…. you’ll see in the video what I mean.
You can see his extensive IMDB list of credits here at https://www.imdb.com/name/nm0823693/?ref_=nv_sr_1?ref_=nv_sr_1

At this point the nerd level was ramped up with chat about growing up with a shared love of Star Wars and the Arena rock band, Styx (yep, you read that correctly) as well as talking about our individual returns to to the world of D&D after similar breaks from experiencing the delights of it in our youth.

Here, Todd discusses his involvement with all manner of D&D aficionados, including working with the redoubtable and delightful Satine Phoenix recently in serving as a stretch goal for her ongoing Kickstarter campaign for the incredible Sirens: Battle of the Bards, a 5E Campaign and Setting in a City of Artists where Bards Inspire Revolution – Roll, the dice baby!

If all that wasn’t enough there was enough time to talk about Todd’s other nerdy ventures including the magnificent web comic, Devil Inside, plus his upcoming book Mystic Libations: Critical Cocktails for the Thirsty Adventurer! – A book of drinks designed by, and for, Dungeons & Dragons players …….The book is a collection of over 100 delicious cocktail recipes, even non-alcoholic mocktail recipes, fun in-world stories, and it even includes a playable RPG adventure AND an all new player sub-class created exclusively for the project.
We also get a good look at his fabulous online merchandise store where he’s the purveyor of groovy wares & nerdy paraphernalia at www.thenerdcircus.com. In fact, it had got to the point in that I’d used up enough of the man’s valuable time, but I could have talked way more about his career and nerdy obsessions!

I would like to take this opportunity to thank Todd for his time and being a generous and thoroughly entraining guest. I DM’d him late last night to thank him and say how much I enjoyed the chat. He responded back saying it was a hoot – which I firmly understand to that being code for perhaps the most enjoyable interview of his career…….Come sail away, baby!

YOU CAN SEE THE INTERVIEW VIDEO BELOW