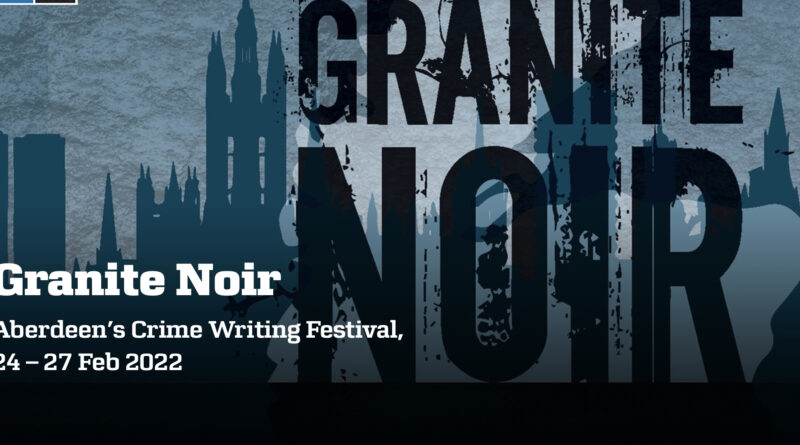 With a healthy dose of mystery, music, crime and cocktails Granite Noir returns to Aberdeen from 24-27 February 2022 to entertain, excite and inspire crime fiction fans with a full programme of live, in-person events, workshops and performances.  Granite Noir, now in its sixth year, is firmly rooted in the Granite City and events highlight Aberdeen’s history, atmosphere and strong sense of place.  The Festival introduces audiences to interesting and quirky spaces across the city which this year include Cowdray Hall and the Kirk of Saint Nicholas Uniting as well as the Central Library and Lemon Tree.

“We are thrilled to announce Granite Noir 2022. With true heavyweights of the genre next to the bold new voices of the future, we have a jam-packed weekend of events in store which really reflect the festival’s firm North East roots, as well as attracting an international fanbase who return year after year to join us for what is a true celebration of crime fiction. Since its inception Granite Noir has really captured imaginations, and with author talks, exhibitions music and of course cocktails to enjoy, it would be a crime to miss it!”

Granite Noir welcomes home-grown talent to the stage including best-selling Scottish author Louise Welsh who introduces The Second Cut, the brand-new and long-awaited sequel to her award-winning The Cutting Room. Ann Cleeves, the creator of popular detectives Vera Stanhope and Jimmy Perez, is joined by Alex Grayand Lin Anderson in a conversation chaired by Jenny Brown andworld-renowned forensic anthropologist Professor Dame Sue Black and Professor Andrew Doig come together in an exploration of The Mysteries of Life and Death.

Authors delving into the murky past of Scotland’s history include Denise Mina, who sheds light on the death of David Rizzio, alongside Jenni Fagan who examines the obsessive mania of a king who saw the threat of witches all around him. S W Perry looks back to the sixteenth century with The Heretic’s Mark as does The Green Lady, Sue Lawrence’s tale of abduction and political turmoil set within Aberdeenshire’s Fyvie Castle. Leonora Nattrass divesinto the revolutionary intrigue of 18th century London and Sara Sheridan sets her mystery in and around Edinburgh’s botanical gardens in 1822.

The Grit in the Granite, a new exhibition from Aberdeen City & Aberdeenshire Archives, exposes the darker side of Victorian Aberdeen. The Granite City’s population more than doubled in the 19th century when many magnificent buildings were constructed, but beneath the grand façade lurked grinding poverty leading to destitution, juvenile delinquency, crime and prostitution.  One victim brought to life in an accompanying talk by Dr Dee Hoole,from the University of Aberdeen, and Phil Astley, City Archivist atAberdeen City & Aberdeenshire Archives, is Grace McIntosh who made her first court appearance in 1838 aged just 11.   Her repeated trials and incarceration left a remarkable historical record of a life lived in poverty and desperation.

Novelists often ensure that the scene of the crime is a character in its own right and their detectives are shaped by the cities in which their stories take place.  Granite Noir Ambassador Stuart MacBride joins Alan Parks and Marion Todd in a conversation with Sally Magnusson about their detectives and their relationship with the three Scottish cities in which their books are set.  Leela Soma draws masterfully on her own dual-heritage to capture Glasgow’s richly multi-cultural nature in her novel, Murder at the Mela.  International voices include Norway’s Kjell Ola Dahl who paints a fascinating portrait of Oslo’s interwar years while Swedish author, and former police officer, Anders de la Motte introduces Dead of Winter which he has set in a small, remote, rural community.  A new voice from the Scandi-Noir genre is Silje Ulstein whose debut Reptile Memoirs is already a bestseller in Norway.

As well as well-kent names, Granite Noir champions new writing and the 2022 Festival welcomes debut novels from American author Ryan Collett, award-winning Scottish short story writer Euan Gault and Northern Ireland’s Hannah King. Airdrie author Graeme Armstrong’s debut The Young Team takes a look at the gang culture of central Scotland from the inside while Aberdeen University graduate Faridah Àbíké-Íyímídé introduces Ace of Spades, an incendiary and compelling thriller with a shocking twist that delves deep into institutionalized racism. Locals in the Limelight returns with six of Aberdeenshire’s talented new writers reading extracts from their noir fiction.  For anyone who has ever dreamed about becoming a published author, award-winning literary agent Jenny Brown hosts a workshop on How To Get Published covering everything from self-publishing to how to get yourself an agent.

Aberdeen-based Ten Feet Tall Theatre presents Witch Hunt, a new production specially created for Granite Noir.  Delving into Aberdeen’s past the performance brings women accused of witchcraft in the 16th and 17th centuries back to life to tell their stories in the atmospheric setting of Kirk of Saint Nicholas Uniting.  Sir Arthur Conan Doyle’s most celebrated adventure, The Hound of the Baskervilles, gets a brilliantly farcical overhaul in Lotte Wakeham’s acclaimed production at Her Majesty’s Theatre.  This ingenious adaptation offers a brand-new twist on possibly the greatest detective story of all time.

Granite Noir 2022 culminates with a performance by the world-renowned BBC Big Band who return to Aberdeen with a specially curated programme of classic TV and movie sound-tracks, from Shaft, Mission Impossible, James Bond, The Pink Panther and more to classic Big Band and swing numbers inspired by all things crime.

“Despite the challenges presented by the Covid-19 pandemic, Granite Noir has continued to grow its reputation as one of the UK’s premier literary festivals, and the 2022 edition promises to be one of the best yet. As well attracting established authors of international renown, it has over the years provided a platform for emerging talent, whilst bringing a distinctive North-east flavour to proceedings with innovative events. Granite Noir is helping mark out Aberdeen as a culture capital – and the council is proud to invest in its staging.”

Creative Scotland’s Alice Tarbuck said: “Granite Noir brilliantly links literature to the cityscape of Aberdeen, providing a rich offering of events in the North East of Scotland. A varied and inviting programme is sure to pique interest with a dazzling array of authors like Louise Welsh, Jenni Fagan and Leonora Nattrass alongside prodigious newer names like Graeme Armstrong.”

Tickets for all Granite Noir events are on sale to Aberdeen Performing Arts Friends on Wednesday 15 December at 10am and on general sale on Thursday 16 December at 10am.  Tickets can be booked at granitenoir.com, also by calling 01224 641122 and in person from the Box Office at the Music Hall and His Majesty’s Theatre. 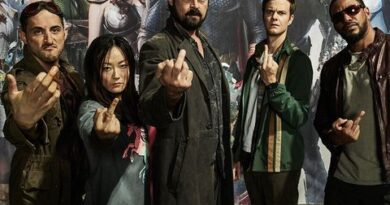 The Boys to return for Season 3 – 3rd June