There have been many times in my life when a particular event hasn’t quite measured up to the long-awaited anticipation, not to mention other events which have quite catastrophically deviated from expected enjoyment to absolute disaster (yes Terminator: Genysis, I’m talking about you). However there have also been occasions when the anticipation has been well and truly worth it – and this week was one of those times. Due to my never-ending stalking of certain filming individuals I’ve been given the occasional snippet of inside information over the last year or so about a particular movie being made by an Aussie mate of mine, Travis Bain – namely the Film Noir influenced ‘Landfall’.

Travis, bless his heart, has been something of a gentleman ever since I first came across his work a couple of years ago after seeing his marvellous Aussie creature-feature, Throwback – because not only has he kept me in the loop regarding his filming exploits but he also in the process introduced me to a legendary actor who has appeared now in a number of his works, the one and only Vernon Wells.

It would be an understatement to say that speaking with the iconic actor from Mad Max: Road Warrior, Commando, InnerSpace (and many more) was a thrill, but if you want t get a flavour of my unadulterated fawning then you could check out the two-part conversations I had with Vernon on the 5D YouTube channel at the following links;

Now as it happens, Vernon also appears in this latest production from Travis Bain and as I said a few moments ago, it’s been something of a worthwhile anticipation because Landfall is quite simply a Film Noir infused triumph!

A young couple in tropical Australia is trapped in their beach house by three fugitives carrying a mysterious icebox containing unknown contents, and they must rely on their wits and cunning to survive as a severe tropical cyclone looms.

Landfall see’s a young couple (Rob Stanfield and Kristen Condon) nervously anticipating the onset of a humongous storm approach from the sea. They are in the process of evacuating the area for a safer place inland, however this plan is soon thwarted by the arrival at their home of an ambulance containing three paramedics. The problem is that these are not the nice kind of helping you live paramedics – nope, they are instead the quite suspicious smack you around the head type of paramedics who seem to be more than a little on the shady side (this may have something to do with them carrying guns and being all kinds of aggressive). Proceedings start to take a distinct turn for the worse immediately when the paramedics, each sporting a Beatles name, Paul (Daryl Heath), George (Andy Bramble) and Ringo (Bailey Stevenson) and carrying a strange icebox, insist that they have come to see another individual (who strangely enough doesn’t have a Beatles name) called Gordo. If that wasn’t bad enough, then the arrival of a veteran cop (played by Mr Vernon Wells) on the trail of some nasty criminal type people sends the whole evening into one giant storm of its very own.

The vast majority of the movie takes place in the one beach house location. This in itself adds any number of challenges for the filmmaker in ensuring that the audience is successfully carried along, two of which are the quality of performances and the dialogue, because is these don’t work in such a limited visual location then the whole production falls apart at the seams. Well for a start the performances are uniformly strong, and yes Vernon Wells does indeed steal each scene he’s in as he skillfully chews his way through some frankly delightful dialogue.

That is not to say that the rest of the cast are weak links; Rob Stanfield and Kristen Condon dependably portray the young couple whilst Daryl Heath, Andy Bramble and Bailey Stevenson give strong performances as Paul, George and Ringo respectively. In particular, Daryl Heath is impressive as the leader of the ‘Paramedic Beatles’ who nicely embodies a certain controlled aggressive paranoia as Paul. Andy Bramble too is excellent as the equally unbalanced George. The dialogue throughout the film is simply a joy at times  as it regularly sparkles with wit and humour, both in the quality of the narrative, but also in the delivery from the cast.

It must be said that Landfall, because and NOT despite it’s one-location status looks wonderful, it is beautifully shot with shades and hues that if anything add to the tight and claustrophobic feel to the night’s violent proceedings. In addition congratulations should also be made towards the movie’s special effects , something which is no small feat bearing in mind the tight budget constraints that the film was under.

Whilst this film may not be perfect, for example the roles of Tony Bonner and Shawn Breck who play two guys escaping from the storm by simply drinking their own weight in beer while their respective wives are on a shopping holiday in Singapore, are both underused in the story. In addition, the middle act slightly loses its way for a short time as the various narrative strands come together. This however is but a minor quibble or two because the power and excitement  – not to mention a plethora of plot twists will carry the viewer along on a rollercoaster of a thriller!

If you want to hear what the man himself has to say about Landfall and the rest of his career, then check out the Skype conversation that I had with Travis earlier this week at https://youtu.be/cCA6Lr6UIrc 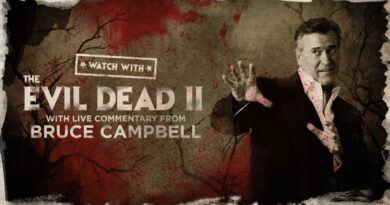