This poster was designed by ace Cairns artist Malcolm Semmens. As the title suggests, Starspawn: Overture is the prelude to the far more epic, feature-length film Starspawn, which we hope to shoot after Covid-19 has abated. Starspawn: Overture is a teaser of what you can expect from the full feature – an hors-d’œuvre to whet your appetite before the main course.

Starspawn: Overture will be released worldwide on Vimeo On Demand on 25 November. Trailer coming soon. Watch this page for updates.

Starspawn is the upcoming feature film by Australian filmmaker Travis Bain of Sapphire Pictures, currently in development. Starspawn was inspired by the works of cult US horror writer H.P. Lovecraft, particularly three of his key stories: “The Whisperer In Darkness”, “The Call of Cthulhu” and “At the Mountains of Madness.”

Cynical TV current affairs journalist Jo Danforth heads to the Outback with a crew of two to interview Byron Green, the enigmatic leader of a group of survivalists. At first Green and his followers seem like harmless cranks. But then Jo and her crew uncover a mysterious book in the camp called the Necronomicon, which foretells of an imminent invasion by ancient aliens known as “Starspawn”, and they realize they are prisoners of a dangerous cult conspiring to cover up the extraterrestrial menace.

Jo and her crew escape into the desert, hunted by survivalists and terrorized by aliens. Lost in the Outback with no food, water or means of communication, Jo and her crew must join forces with an alcoholic farmer and his rebellious teenage daughter to warn humanity and stop the Starspawn from taking back the planet that was once theirs: Earth.

Starspawn is a science-fiction horror thriller inspired by the works of revered horror writer H.P. Lovecraft, the films of John Carpenter and the classic Led Zeppelin song “Kashmir.”

Starring Vernon Wells, others yet to be announced. 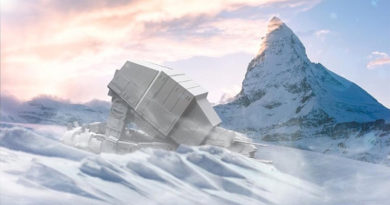