Once in a while a film comes along that serves to remind you that this particular art form can still surprise and delight in ways that other art forms simply cannot do. The impact that social networking in particular has had in almost completely removing the surprise and mystery of new film releases means that the ability of a film to ‘sneak up on you’ from obscurity is becoming less and less of an occurrence. Gone are the days when film like Juno or Paranormal Activity would seemingly come out of nowhere to gain critical and commercial success that would contrast with its humble origins. Thankfully, there are exceptions to every rule.

When I was first asked to provide some thoughts (insightful, amusing, intelligent…… you know how it goes) on a new film about to receive a limited UK theatrical and impending DVD & Blu-Ray release entitled The Man Who Killed Hitler and Then The BigFoot, well I was hooked straight away.  I personally couldn’t do anything else but consider watching a film with such a groovy title. I know that there are some who will be put off by the film’s name – I have been heard some ask what’s the point of watching the movie when the title essentially gives the plot away. Nonsense, the title merely scratches the surface of what is an incredible directorial debut from Robert D. Krzykowski who has put together a richly textured character driven fantasy dealing with themes of missed opportunity and personal regret. And there’s also a Bigfoot – geez, what more could you ask for?

So there you have the first selling point (for me anyway) with the film’s title. The second initial selling point was the inclusion of a certain cinematic screen legend, a rather well-known young Irish actor and an ensemble cast of familiar faces. In truth I was initially sceptical – just how did a director of his first feature-length film obtain the caliber of Sam Elliott, Aidan Turner, Larry Miller et al to appear in this low-budget fantasy film? And just what would be the result?…….Well let’s just say that my initial scepticism would soon disappear, because quite simply, The Man Who Killed Hitler and Then The BigFoot is a complete joy.

Decades after serving in WWII and assassinating Adolf Hitler, Calvin Barr (Elliott / Turner) is enlisted as the only man for the job: to hunt down the fabled Bigfoot. Living a peaceful life in New England reflecting on his lost love Maxine (Caitlin FitzGerald – Masters of Sex, It’s Complicated), the war veteran is contacted by the FBI and the Royal Canadian Mounted Police to lead the charge to capture the elusive beast that is carrying a deadly plague.

Can he find the dangerous creature deep inside the Canadian wilderness before it’s too late?

Sam Elliott plays Calvin Barr, a man who lives alone in a small New England town along the Canadian border. His existence is mostly solitary and quiet, his only friends being his trusty dog Ralph and his younger brother, Ed (played by the fabulous comedian, Larry Miller). It is quite clear from the outset that Calvin is something of a broken individual as we witness flashbacks to earlier in his life where his younger self (played by Aidan Turner) not only kills a man in the course of his military career (non other than a certain Adolph Hitler) but before that meets the love of his life, Maxine (played by the delightful Caitlin Fitzgerald). It seems that emotional regret surround both episodes now in his later life.

It will come as no surprise to most people that Sam Elliott’s central performance of an essentially decent man who has (at least in his own mind) committed a terrible act, and with it perhaps sowed the seeds of his discontent, is stunning. Whether it be the purposeful drawl of his dialogue, the career defining I-know-something-you-don’t glint in his eye, or the rueful sardonic smile – Elliott’s performance is as charismatic and magnetic as one would expect. This is no better exemplified than in the scene where he returns a lottery ticket that he found in the street back to the store from where it was found. He then tries to persuade the incredulous shop assistant that he doesn’t want the money, instead he simply wants leave the ticket so that the winner may turn up and claim it. It is a simple scene, perhaps to some even a superfluous scene. However for me it is squarely central to the man’s character and tells us everything as to why he feels the way about his life in the way that he does.

However, don’t think that this is solely Sam Elliott’s character study of a man haunted by the act of killing another living being. The film benefits from a fine ensemble cast throughout as we witness Calvin’s early life played by the excellent Aidan Turner, in particular in reference to his burgeoning relationship with Maxine. The scene which takes place the night before Calvin leaves for active service is wonderful, poignant and beautifully acted between Turner and Caitlin Fitzgerald.

So what do we have so far?…part World War 2 thriller, part love story and part fantasy. In fact at the core of this story are TWO love stories, for me the relationship between Calvin and his younger brother Ed is central, not only as a signpost of Calvin’s regret but also as the one hope for Calvin’s emotional redemption. Larry Miller is excellent as always, though this time in a more serious role than in his comedic past.

The Man Who Killed Hitler and Then The BigFoot Is not just emotionally resonating story, but it looks wonderful. The film is beautifully shot and takes full advantage of the stunningly beautiful Canadian landscape. I saw the film on the love of my life (my IPad Pro12.9 and I was constantly amazed by the cinematography. However I know for a fact (because the director told me himself, more of which later) that the film was intended as a theatre experience – I can only imagine how good it looks on the big screen. The third act, in which Calvin embarks on his tracking of the Bigfoot is a feast for the eyes.

The icing on the cake in the visual aspect of the film comes from the involvement of legendary filmmaker and visual effects pioneer, Douglas Trumbull. The man was one of the Special Photographic Effects Supervisors for 2001: A Space Odyssey (1968). He went on to become the Visual Effects Supervisor for such classics as Close Encounters of the Third Kind (1977), Star Trek: The Motion picture (1979), and Blade Runner (1982), each of which earned him an Academy Award nomination for Best Visual Effects. If that wasn’t enough he only went and directed one of my favourite films ever, the beautiful sci-fi classic, Silent Running (1972).

Douglas and his Skywalker team worked closely with the filmmakers in a number of special effects scenes in the movie – a personal favourite of mine being a Stuka flyover scene…..breathtaking.

Mention also has to be made of the soundtrack by Joe Kramer. Joe has worked on films such as Kraemer: The Way of the Gun, Jack Reacher, and Mission: Impossible – Rogue Nation. Here he produces a beautiful symphonic score with echoes of classic John Williams – Yes, it’s that good.

The Man Who Killed Hitler and Then The Bigfoot will now arrive on Blu-ray along with the DVD on 6 May 2019, following the digital release on 15 April 2019.

There will also be a limited theatrical release, with the first performance at THE PRINCE CHARLES CINEMA in London on Friday March 12th.

I was incredibly delighted just a couple of weeks ago to be able to talk with Robert D. Krzykowski about his debut feature film, The man who killed Hitler and then the Bigfoot. Bob (I’m allowed to call him that) and I talked about the making of the movie and his experience of working with legends galore!  I also had the chance to ask him about the fantastic film noir (with puppets!) Elsie Hooper, his early short film included in the special features. Believe me, you really need to see this too!

You can hear the interview with Bob below……. 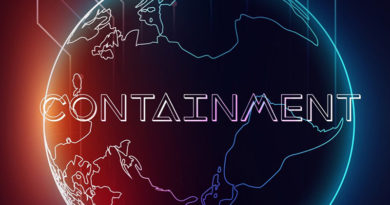 5D GUEST POST: The Good, the Bad, and the Ugly of Technology Predictions in Movies