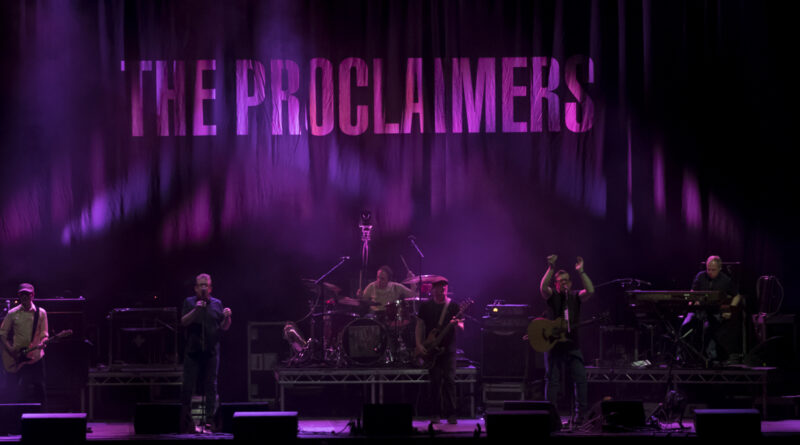 For the past couple of months the much loved twins have been touring the UK; and this concert was the 54th and last night of their Dentures Out 2022 tour.

The support band around Scotland And Ireland, and so for this gig, was from Ross Wilson or Blue Rose Code as his band are called.  (According to the programme England and Wales had John Bramwell.)  Ross just had a keyboard player and a drummer with him for this tour but will be back in April at the Lemon Tree if you would like to experience the full set up.  Ross sang an amazing version of Amazing Grace, a bluesy/jazzy version of his very own unique style.  He also nearly moved me to tears with his own song Do You Ever Ask Yourself.
He introduced it talking about the current situation where some children are waking up hungry and going to school hungry and he mentioned a charity called Magic Breakfast which is providing breakfast to school children so they are able to concentrate and learn.  He had an amazing energy and I would certainly be keen to see the full band perform.

The Proclaimers opened their set with the title song of the tour and new album: Dentures Out.  Their new material has a more spoken aspect to it, which suits them.  We set list included Things As They Are from the album but did also feature a variety of songs through the years, including the expected hits of Cap In Hand, Letter From America, and of course 500 Miles.  Sunshine on Leith featured a stunning violinist Erica Nockalls.  Her golden dress was as stunning as her playing!  Before playing Let’s Get Married it was announced that Denis Parry had something to ask his girlfriend – hopefully she said yes, am sure that is not the first time someone has used that song to propose!  Before singing Then I Met You there were also some shout outs for wedding anniversaries and birthdays.  Not every band is willing to take the time to acknowledge the special events that matter tot their fans.

Obviously we all know Craig and Charlie Reid but the rest of the band are talented musicians too.  On this tour the twins are accompanied by Steven Christie on keyboards, Garry John Kane on bass (and jumping up and down!), Zac Ware on guitar and Clive Jenner beating the hell out the drums at the back!  As it was the last night of the tour each member of the band was thanked, and the crew and Regular Music the promoters.  Most people attending a concert probably are rather oblivious to all the back stage people that bring the show together but it really is an amazing piece of teamwork to run a tour.

The confusing thing was when I’m Gonna Be finished and the band said goodnight and left the stage.  Everyone was clapping and cheering, and we turned to each other and said “but what will the encore be?  They’ve done all the hits”.  This was soon answered when they came back on stage and said they would sing a song that was not a hit, but is actually one of my favourites.  They really did “stay and Make My Heart Fly”!  We finished up with The Joyful Kilmarnock Blues, which was a fabulous high to end an equally fabulous evening!

On a personal note, this was a fabulous evening for my family.  Back in 2015 my husband and I got tickets to take our son to his first proper big concert, to see The Proclaimers at the AECC.  Completely unrelated to my reviewing perks we ended up being invited back stage to meet the Reid brothers, and Owen got a signed programme.  It was an amazing night and these 7 years later Owen has just passed his very first ever exam: Grade 3 in guitar.  He was chuffed to bits when I said I was reviewing the Proclaimers and would he like to come.  We took his friend and classmate, who plays piano, and it was his first ever concert.  I got them each a programme and as there were signed posters available I got the chum one of those as well.

So now they both have signed mementos from their first concert, seeing the Proclaimers.  You cannot get much better than that!  I utterly love sharing the joy of live music with youngsters: seeing their faces, watching their grins, seeing their lips go along with the lyrics.  I remember back to my first gig, the buzz that gave me and how it has led me to a lifetime of happy memories seeing various bands over the years and getting lost in the music.  There honestly is no better gift than the experience of live music.  Thank you to all the Proclaimers crew for such priceless memories.